The Legacy of the N1 Deck Jacket

We’re going back even further into the history books to explore another classic garment with its origins on the battlefield. This time, we’re taking to the high seas; pack your duffle bag and keep reading.

There are few pieces of outerwear which can boast an almost 80 year history, with their design, functionality and style, still being fit for the modern day. Considering them a ‘classic’ perhaps doesn’t carry enough weight for these cornerstones of our wardrobe and we turn a blind eye to them because we see so many reproductions or reinterpretations. But we’re going to spend some time looking at the history of one garment which has truly earned its place amongst the greats

Since its establishment in October 1775, the United States Navy has grown and developed exponentially over the last 120 years. From the ashes of the Civil War, where maritime warfare was put to the test, to the vast campaigns of the Spanish American War, the beginnings of the Twentieth Century saw the rise of a modern navy.

Under Roosevelt’s administration, the US Navy became the second largest seaborne fighting force in the world (second only to the Royal Navy). But, while the Navy’s power continued to expand, the uniforms of its sailors were still very much of the old school. Using wool as the main source of insulation for colder climates and cotton for cooler environments, the appearance of a US Navy sailor was formal and traditional, with work uniforms not being what they were thirty years later.

A US Navy sailor wear a peacoat on deck.

From outposts in the North Atlantic to Alaskan station stops, the humble peacoat was the go-to garment for combatting cold weather prior to the outbreak of the Second World War. Already in long-standing service, the peacoat had gone through a number of iterations in the first decades of the Twentieth Century. However, its key design principles remained the same and they still do to this day. Made from a body of navy blue heavyweight wool, with a double breasted front, two chest pockets, a large fold down collar (with chinstrap closure for those biting winds when the collar was stood up), brown corduroy pocket linings and limited decorative adornment, it was a beautifully functional and understated piece of military outerwear. These would include cold weather, wet weather and tropical weather. With ships stationed everywhere from Dutch Harbor to Oahu and the North Atlantic to the Mediterranean, a uniform was needed for every kind of environment. From photographic evidence and the study of history, it’s clear that the cold weather uniform, commonly now referred to as the N1, was the most popular used by US sailors during WWII.

Developed in 1943, the N1 system comprised of the now famous deck jacket, a bib and brace overall and a soft ‘helmet’ with a peaked front. All pieces could be worn independently of one another, or paired with other uniforms items as necessary. The helmet featured a bold ‘USN’ stamp on the rear neck covering, with a chinstrap and peaked front. Whereas the bib and brace overalls were made in a traditional workwear style and heavily insulated. Protecting sailors from biting wind and freezing temperatures, it saved many a sailor from the harsh natural environment whether at sea or on land.

Due to the impracticality of overalls, even though they were well designed and functional, a sailor couldn’t wear them 24/7. A waist length jacket that offered warmth and comfort on the other hand, became a second skin.

The N1 deck jacket was made from a hard-wearing ‘jungle cloth’ outer shell which was paired with a warm alpaca lining. Jungle cloth is otherwise known as Bedford Cord. Named after the town of Bedford in England, it is a durable fabric that resembles corduroy. The weave has faint lengthwise ridges, but without the filling yarns that make the distinct wales characteristic of corduroy.  Light olive drab or ‘khaki’ in color, the jacket barely changed during the war years. A testament to its perfect design, we can see evidence of the N1 being worn many years after the end of the Second World War.

An earlier version of the jacket did exist however, in a navy blue, but this was quickly superseded by its khaki counterpart. Highly sought after within the collecting community, an original example of the blue N1 is extremely hard to find in any condition, as they were only produced in small numbers and had a very short lifespan. The jacket featured a drawstring skirt, storm cuffs and a hidden chinstrap collar. It was hip-length with two side pockets and the warmth of the alpaca collar gave the jacket its iconic profile.

When the N1 jacket was issued, there was little in the way of decorative adornment. A black stencil to the left chest denoted ‘U.S.N.’ in 3” bold type, denoting the wearer was a member of the this leading fighting force. In addition, a white label in the neck showed the official nomenclature of the garment with a contract date and size. But it didn’t take long for shipmates to customize the N1 in true sailor fashion. Often painted or stenciled with a ship’s name on the reverse, it was also common place to show where the owner had visited while at sea. These ‘station stops’ were a sign of a veteran’s status and added a touch of flare to sailor’s otherwise clean jacket. An example of WWII period stenciling applied to the reverse of an original N1 deck jacket.

The N1 saw use in all theatres of the war, including the European, the Mediterranean and the Pacific. As well as shipboard personnel, Navy engineer brigades, landing parties and shore patrols all wore the jacket as well. It was a garment that was equally at home on land as it was at sea. Being such a stylish, versatile and functional jacket, it even found its way to other branches of service and was ‘commandeered’ from naval supply depots. The jacket was worn well into the 1950’s and 60’s, even after it was officially superseded by successive garments. Back home in the US, as many veterans of the war settled into civilian life, they took their revered deck jackets with them. Put to use in farms and factories across America, the functionality of the jacket was becoming part of the civilian uniform. But the jacket really came into its own on the salt lakes of Utah and the highways of California. From El Mirage to San Bernardino, outlaw motorcycle clubs and hot rod racers favored the N1 for its warmth when speeding across the salt flats or down the streets of Oakland. Even Hollywood took note of the jackets undeniable style cues, with stars of the screen James Dean and Paul Newman wearing the N1. The jacket remained in service until the 1960s when it was superseded by the A2 deck jacket (not to be confused with the A2 flying jacket), a testament to its original design and functionality. The main difference with post-war variants was the darker green color and it was these garments which were officially designated the ‘N1’ on the neck specification label (wartime versions only noted size, contract number and ‘Navy Department’). But during its career, the N1 changed very little and retained its original specifications.

With the enduring fixation on heritage and classic menswear within the fashion world today, the N1 deck jacket has never been so popular. With original garments fetching hundreds of dollars on the vintage market and every day a revised or reproduction version of this humble classic is released. The N1 deck jacket isn’t only a timeless piece of military outerwear, it’s a cornerstone of the modern man’s wardrobe. Almost 80 years later, it still stands up to the test and can look classic and contemporary, whatever the environment.

The Real McCoy's produces what we consider to be the purest reproduction of the N-1, and we stock it in both the navy and khaki colorways. Their reproduction of this well-loved jacket features a 100% cotton grosgrain shell with an alpaca lining and collar. The zipper is a period-correct bell-shaped Talon. 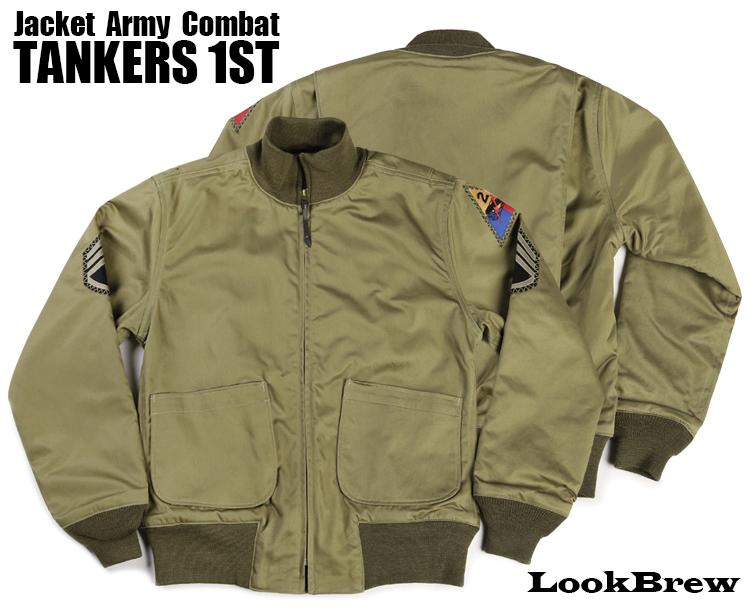