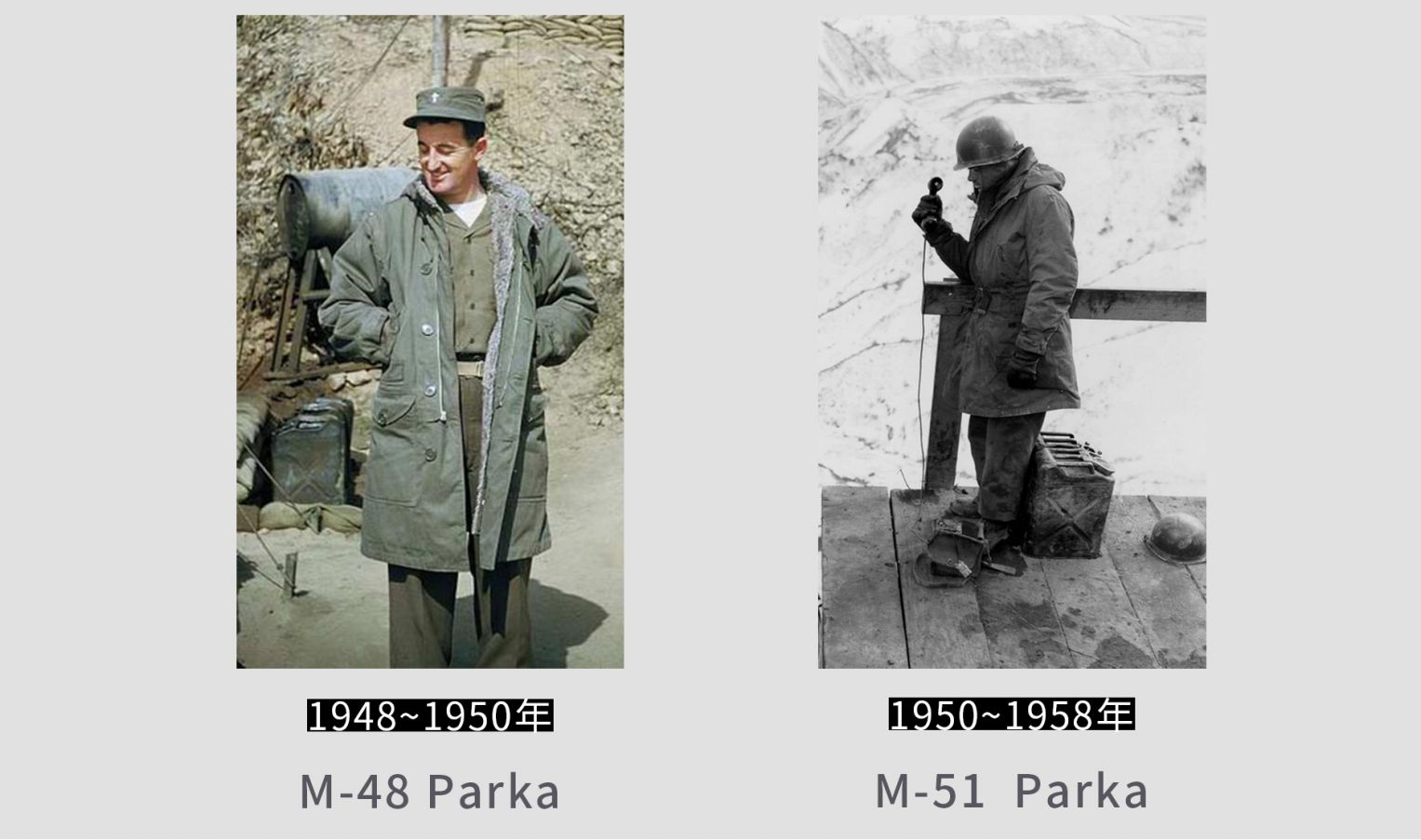 The very first mod fishtail parka was an M-1948 prototype which was a clear crossover from the M-1943 parka to the parka that finally went into production and is the well known M-1948 fishtail parka. Only two of these initial prototype M48 parkas are known to exist. Yours truly, fishtail parka's possess one and the other is in a museum in the United States. Following this initial prototype came the EX-48-1 and the EX-48-2 models. The EX-48-1's with fibreglass liners are the prototype more widely known for being the M-48 Fishtail Parka prototype. The EX-48-1 prototype parka hood was trimmed with wolverine fur, the outer shell was the thinner poplin material as used for the later mass produced 2nd Gen M-1951 fishtail parka's. The most famous elements of the EX-48-1 model are the detachable "fibre glass" based lining plus the distinctive pencil / cigarette pocket on the left sleeve (much like the MA1 flying jacket sleeve pocket). The production version of the M-1948 fishtail parka used the heavy cotton sateen wind resistant material and a fur pile / satin liner that is like walking around in a duvet :)..... 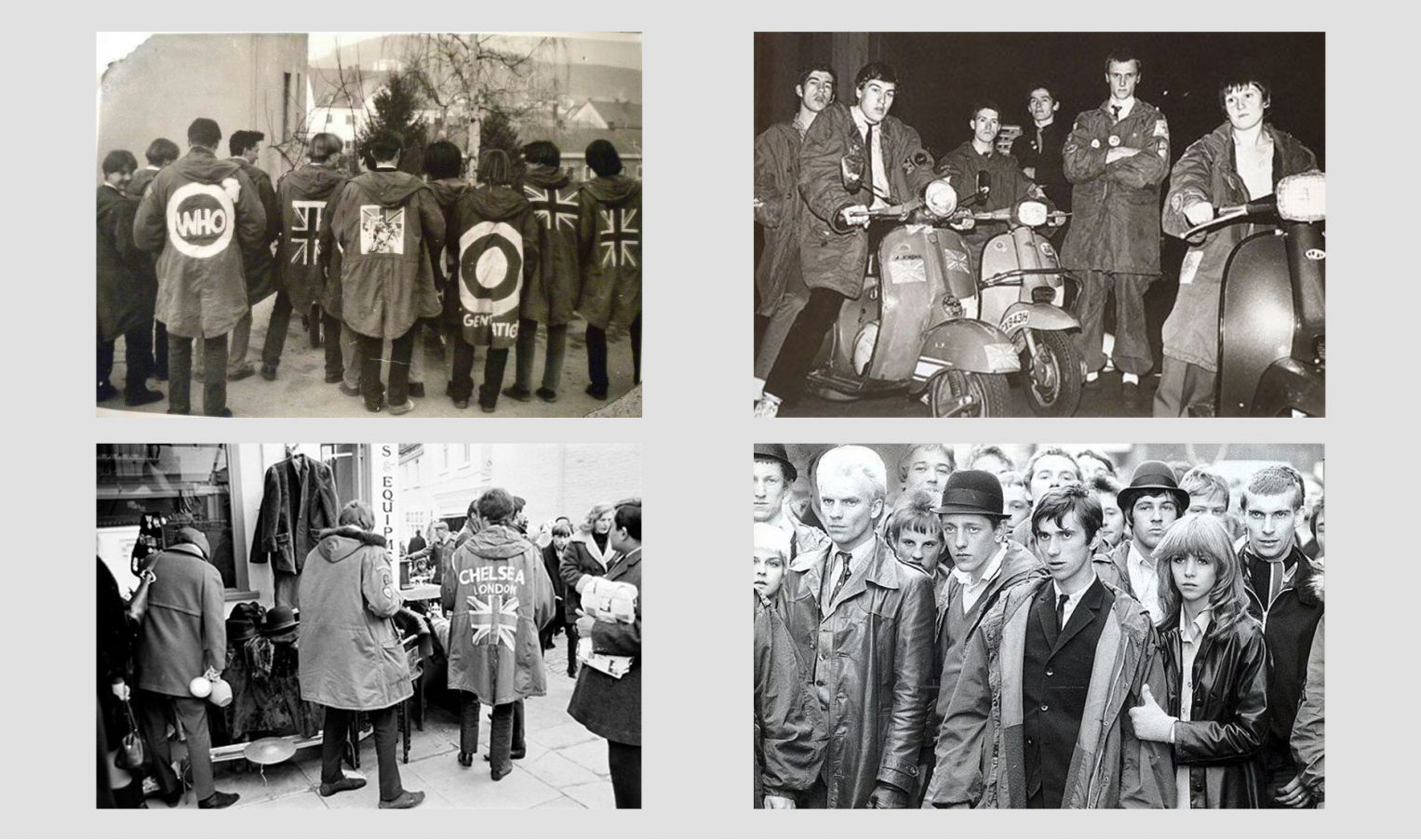 The concept of the Fishtail Parka design was to offer flexible extreme cold weather protection through detachable parts and also, the "fishtail" was designed to be tied around the soldiers legs for extra insulation. The fishtail parka rear drawstrings also benefited airborne divisions as when jumping out of planes it could be tied so not to flap up and about.

The first mass production of the fishtail parka was in 1951 and hence the M-1951 fishtail parka, commonly known as the M51 parka was born. The US Military now heading into Korea, needed large amounts of cold weather field gear and could simply not afford to mass produce the heavy, expensive and high quality M-1948 fishtail parka. The M-1951 parka was a cheaper cut down version of the M-1948 parka. The first generation of these differed from the M48 parka in that there was no sleeve pocket, the heavy fur pile and satin full fitting lining was replaced with detachable mohair or alpaca linings. Whereas the M-48 was a 2 piece construction, M-48 Outer Shell and M-48 Liner both with fixed hoods attached;  the M-51 was a 3 part construction with M-51 Outer Shell, M-51 Liner and a separate winter wolf fur trimmed detachable hood. This new M51 parka design would allow individual parts to dry faster which was key for soldiers fighting in such a cold and harsh environment. 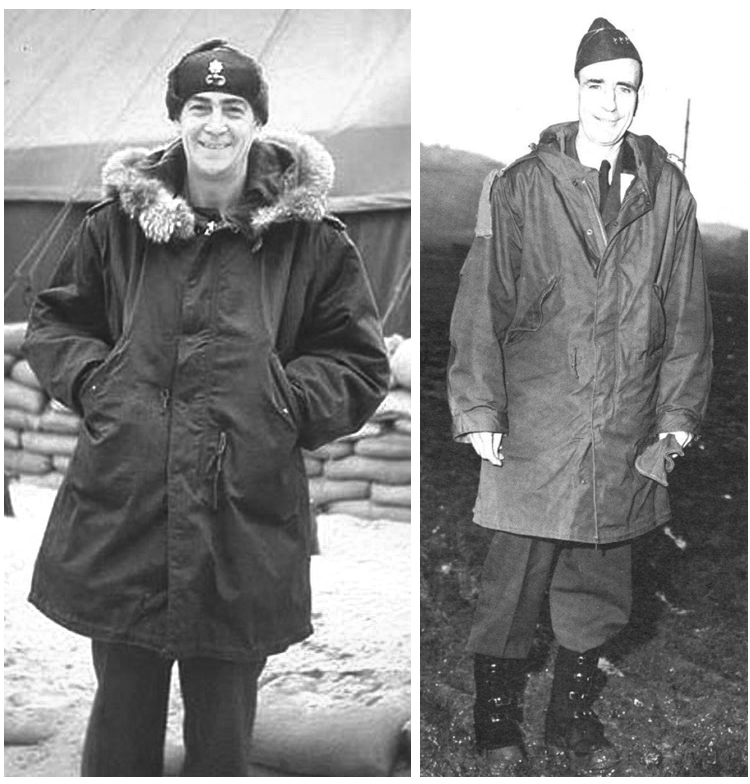 Another noticeable distinction was that the M51 parka featured shoulder epaulettes that could be buttoned down to hold hats or other light items. The 1st Gen M-1951 fishtail parka's were produced using the same wind resistant heavy cotton sateen material as the M-48 and featured a thick, heavy Alpaca wool liner. Once again, this proved expensive to produce and the liners were hard to dry in the field once wet. Hence, the heavier M-48 cotton sateen material was dropped in favour of the more commonly seen thinner, lighter (shiny) cotton twill (Poplin), and the alpaca wool liners were replaced by mohair frieze wool. The 2nd Gen M51 parka's went into production in 1952 and were mass produced in comparison to the 1st Gen versions.

Production of the M-1951 fishtail parka continued in the United States up until 1956 when production ceased. After this period M-51 production continued in US territory in the now defeated and occupied Germany up until 1958. You will often find German made M-51's which are given away by the spelling of Mohair Freeze as Mohair Frieze. Another run of M-51' parka's was made around 1963 for UK and Canadian Specification. After this time, no more M-51's were produced and the fishtail parka saw no new events until 1965 when it was once again updated and remade as the M-1965 Fishtail parka. 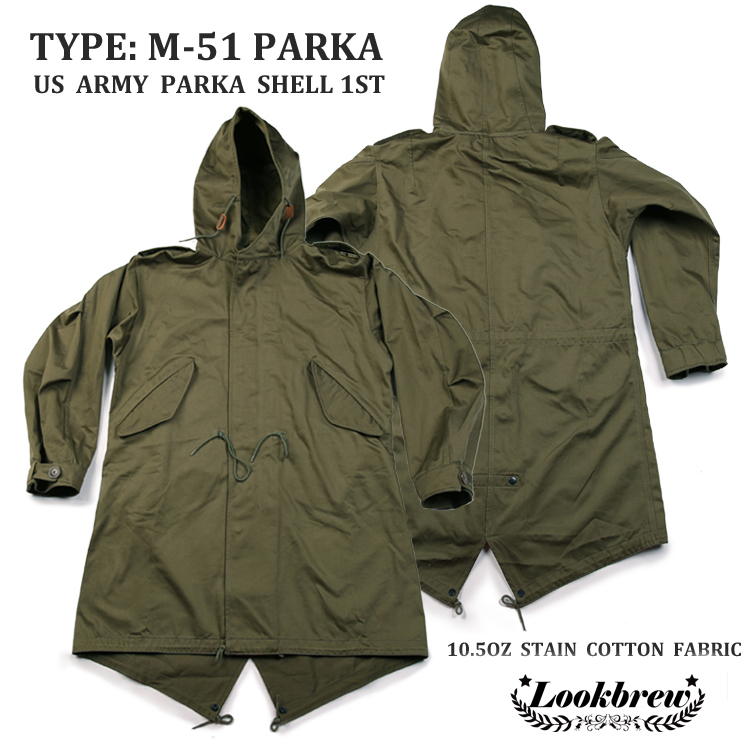 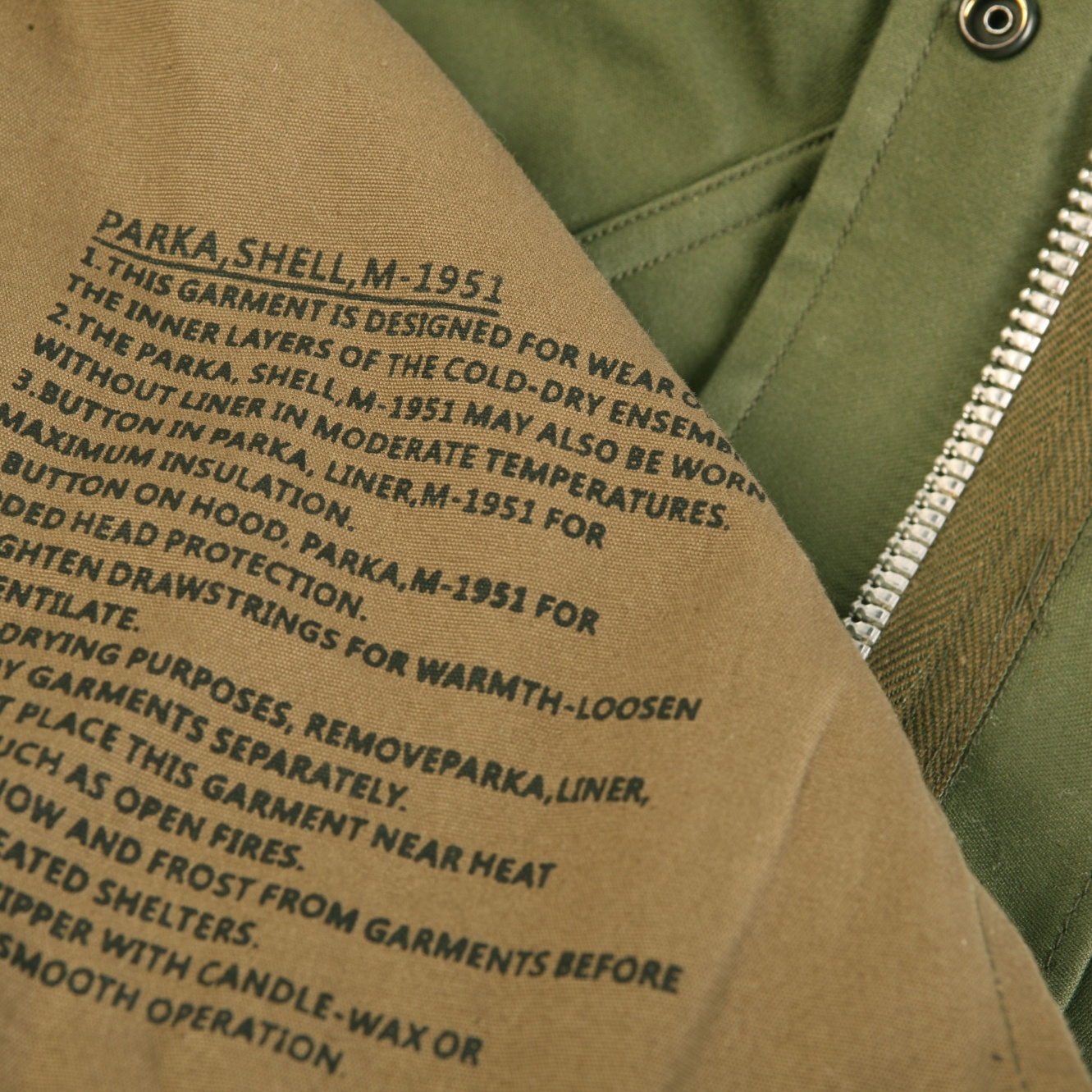 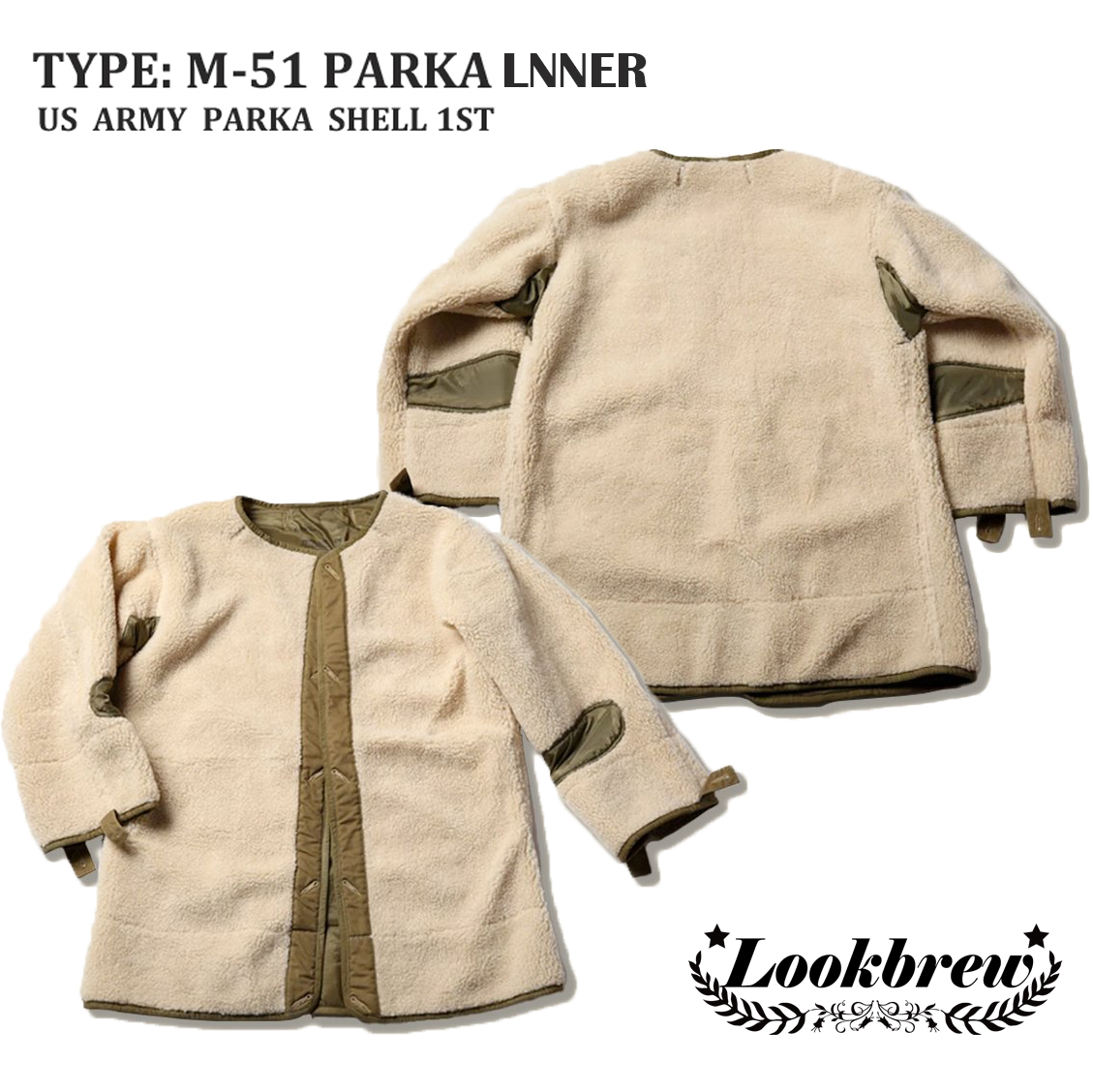 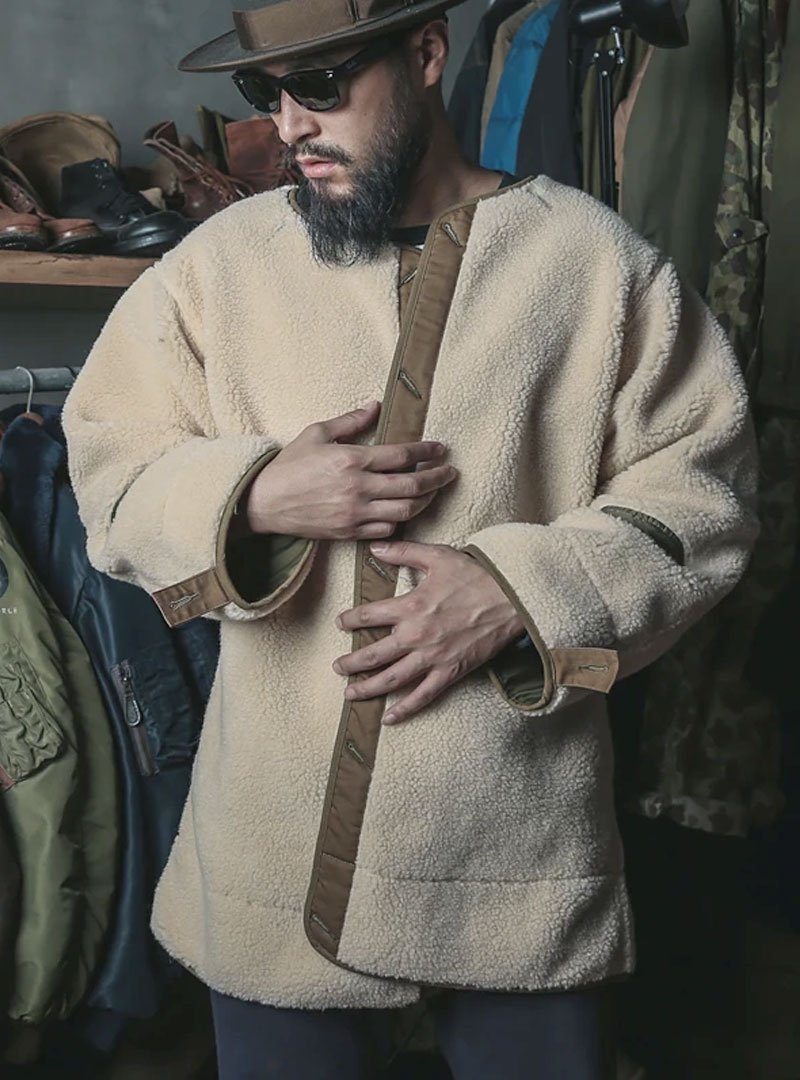 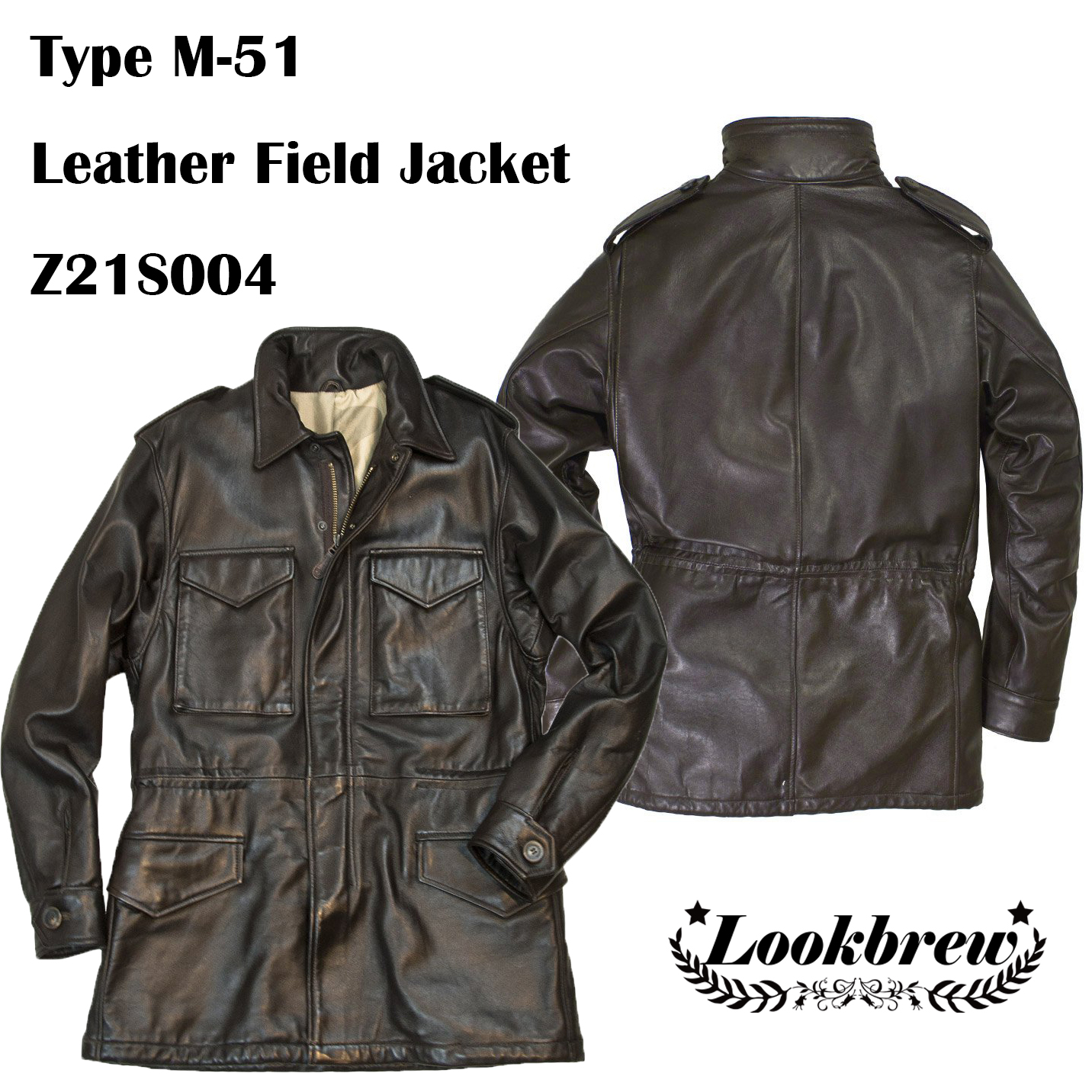