A True ‘OG’: The US Army’s Olive Green Utility Uniform

The US Army is responsible for some of most stylish garments ever to come out of any military. For the past hundred years, military garment design has been revolutionized from the tailored stand up collar dress jackets of the First World War to the digital and pixelated camouflage of the modern battlefield. This has been the result of technological innovation, enhancements in fabric developments, socio-cultural change and battlefield doctrine. Iconic pieces of clothing like the M65 Field Jacket have found their way into the history books as a time honored classic, a tireless silhouette and a cornerstone of any man’s wardrobe.

Often born from the need to adapt to environmental considerations, military garments are developed for a specific purpose and to meet the needs of the boots on the ground. Whether that need is to protect from cold weather, keep dry from pouring rain, offer ventilation in the heat of a jungle or allow for enhanced movement, military garments are products of their environment. Nevertheless, some garments have seen service long past their expected usage and maintained their status as suitable and sustainable uniform.

Again, take the M65 for example. Originally born as the M43, the core design of the jacket changed little from the 40’s to the 80’s. Many of these garments have also become a uniform of another army; that of sub-cultures. Often due to being discarded by governments and becoming ‘surplus’ military uniforms have been hastily adopted by civilians due to their affordability, availability and practicality. One only has to look at the US Army ‘Fishtail’ parka which became the unofficial uniforms of British ‘mods’ as they rode their scooters down the streets of English cities in the 60’s and 70’s.

The OG107 is one uniform which has stood the test of time during its military career, as well as its second life as a classic piece of menswear. Originally developed in 1952, the Olive Green shade 107 cotton ‘utility uniform’ or ‘OG107’ as it came to be known, is the classic example of military ‘fatigues’. Called such because they were worn during fatiguing duty, they stayed in service for decades after their implementation (although went through a subtle modification or two).

Reproduced and reinvented by countless fashion brands over the years, we’re going to delve deeper and look at the development and purpose of these true ‘OGs’. We’re going to examine the design, implementation and modification of the OG107s in order to give you a better understanding as to why these need to be in your kit bag.

Prior to the outbreak of the Second World War, the Army’s work clothing consisted of denim coveralls and a two piece suit. Following the mechanization of the the US Military, olive drab herringbone twill uniforms became the ‘go-to’ garments for work and combat purposes. They took on the appearance of what we might class as ‘fatigues’ and generally featured a button front with two chest pockets, as well as trousers with two large ‘cargo’ type hip pockets (as well as coveralls for mechanics).

Due to the popularity and suitability of HBT ‘fatigues’, the 1949 Uniform Board created a separate category of clothing to be known as ‘Field and Work Clothing’ which meant the uniforms didn’t need meet the requirements for garrison duty wear. The uniform would be worn with the shirt / jacket tucked In and trousers bloused over boots. It would be routinely starched and even ‘match faded’ in numbered sets to achieve consistent coloration despite frequent washing. The uniform was made in the Army’s infamous Olive Drab shade 7 and originally featured japanned black metal tack buttons which were later replaced by flat plastic sew-on buttons.

During the Korean War, textile research was conducted and a more durable cotton was developed which had the same weight as herringbone twill. Coming in at 8.5oz and manufactured in Olive Green shade 7, the material was used to produce the new utility shirt and trousers that we would come to know as OG107s.

As with its predecessor, the uniform was intended to be loose fitting and used for work duties. Produced in late 1952, the shirt would feature straight sleeves, upper patch pockets on the chest with rectangular buttoned flaps (this came to be known as the Type I). The trousers had large patch pockets at the hip, two rear pockets with rectangular buttoned flaps and adjustment tabs at the waist.

The trousers largely maintained their initial specifications during their lifespan, whereas the shirt underwent a number of modifications over the years. A subtle change was made in 1963 to include clipped corner pocket flaps, altered button spacing and a higher neck opening (this came to be known as the Type II).

A year later in 1964, further changes were made to the utility shirt including the introduction of pointed pocket flaps, concave dull plastic buttons and it would be made from cotton sateen (this came to be known as the Type III). The US Air Force also took inspiration from the revised design and produced a similar shirt in a cotton blue twill (shade 1549). Amongst this period, the garments also changed in sizing - from ‘small’ / ‘medium’ / ‘large’ to true sizing, eg. 32 x 30.

The last and perhaps most significant change occurred in 1973 when the US Army began to test utility uniform made from a poly-cotton blend in Olive Green shade 507. This resulted in wash and wear enhancement, thus the OG507s were born. With a distinctly different look and feel to the material, the uniform was named the ‘durable press’ utility trousers and shirt. It was easier to clean and maintain, although some officers and NCOs (non-commissioned officers) felt that the material and lack of starching resulted in a slouchier garrison duty appearance.

As with many field uniforms, despite strict regulations, OG utilities were often modified by the wearer. Routine modifications included extra pockets, cuffs added to straight sleeve jackets, added shoulder loops and tailoring to give a more fitted appearance. In addition, the utility uniform was often adorned with relevant insignia including name, rank, branch of service and division. This added another level of personal ‘flare’, particularly before subdued insignia was introduced.

The OG107s saw widespread use throughout the Cold War, most notably during the Vietnam era. Fast becoming one of the most commonly used uniforms worn by US troops in Southeast Asia (SEA), everyone from desk clerks to Special Forces operators utilized the trusty OGs.This continued throughout the war with many old salts holding onto their OG107s as a sign of their veteran status and earlier time ‘in-country’.

From the 1950’s to the early 1980’s, the OG107 (and later OG507) utilities became a defining uniform of the mid-twentieth century and one of the longest serving uniforms in the US military of the twentieth century.

Arguably, their success lay in their simplicity and adaptability. The utilities were an overly simple design and while they underwent subtle modification, they changed very little during their lifespan. They were suitable for a number of scenarios; work and manual labour, garrison duty and of course, combat. They also formed the basis of many soldier’s uniforms in different environments, from stateside Basic Training, to European outposts and the jungles of Southeast Asia.

Due to the standardization of the OG utilities across all branches of service, production runs often ran into the thousands. And while the uniform had a long lifespan, it didn’t circumvent the fact that many uniforms quickly became surplus to requirements. Like many military garments of the late twentieth century, OG utilities found their way into the Army & Navy stores of America (and even overseas).

Due to their rugged construction, simplistic appearance and cheap prices, many civilians donned a OG107 shirt as their own form of workwear. Others adopted the utilities as their own uniform, from activists and Vietnam Veterans Against the War to characters of the hit TV sitcom M*A*S*H and celebrities like John Lennon. Even British ‘skinheads’ adopted the OG107 trousers as their own.

Referring to them as ‘army greens’ or ‘dockers’ (presumably because some dock workers wore them), OG107s were worn by first wave skinheads in the late 1960’s. A part of the Kilburn Mob’s uniform, they were often combined with commando boots and Dunlop trainers.

Overall, these true OGs have left a lasting impression on twentieth century menswear. From their universal design and appeal to their celebrity and sub-cultural endorsement, the OG107 utilities are without a doubt, the original. 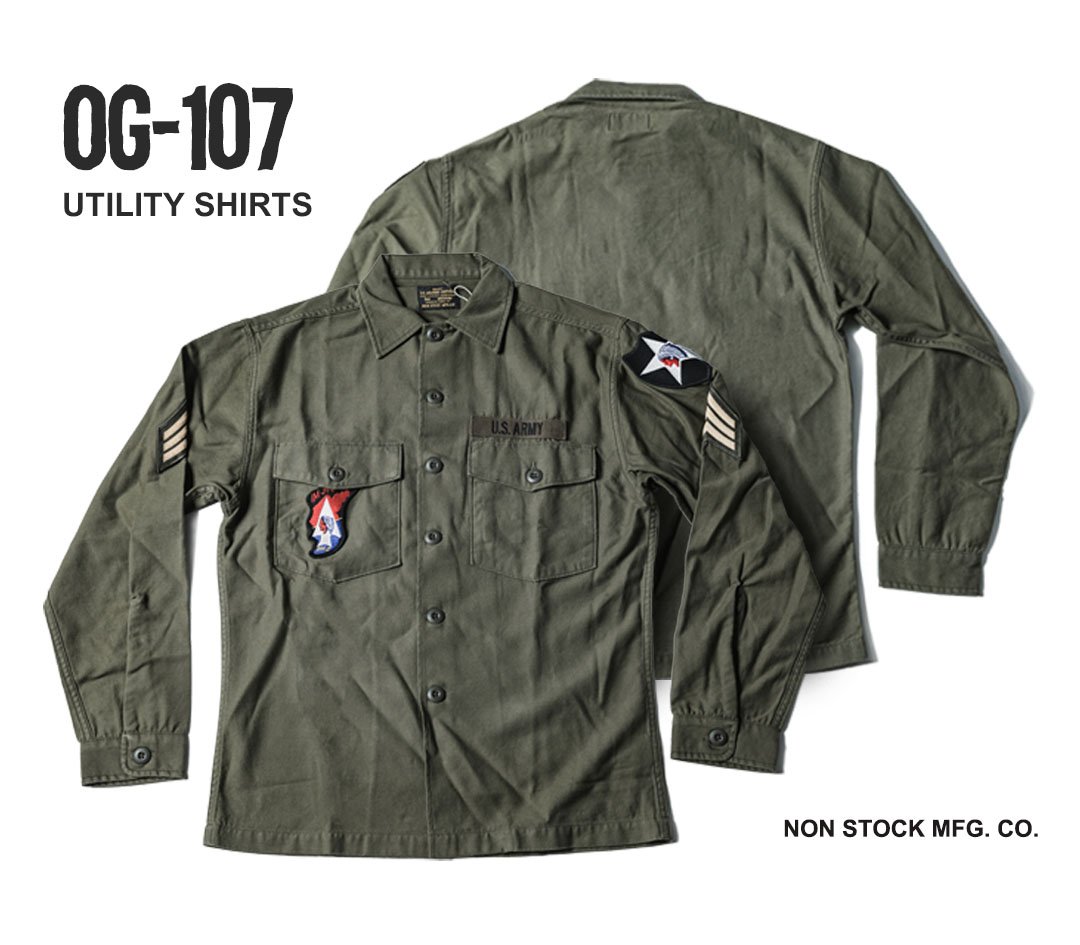 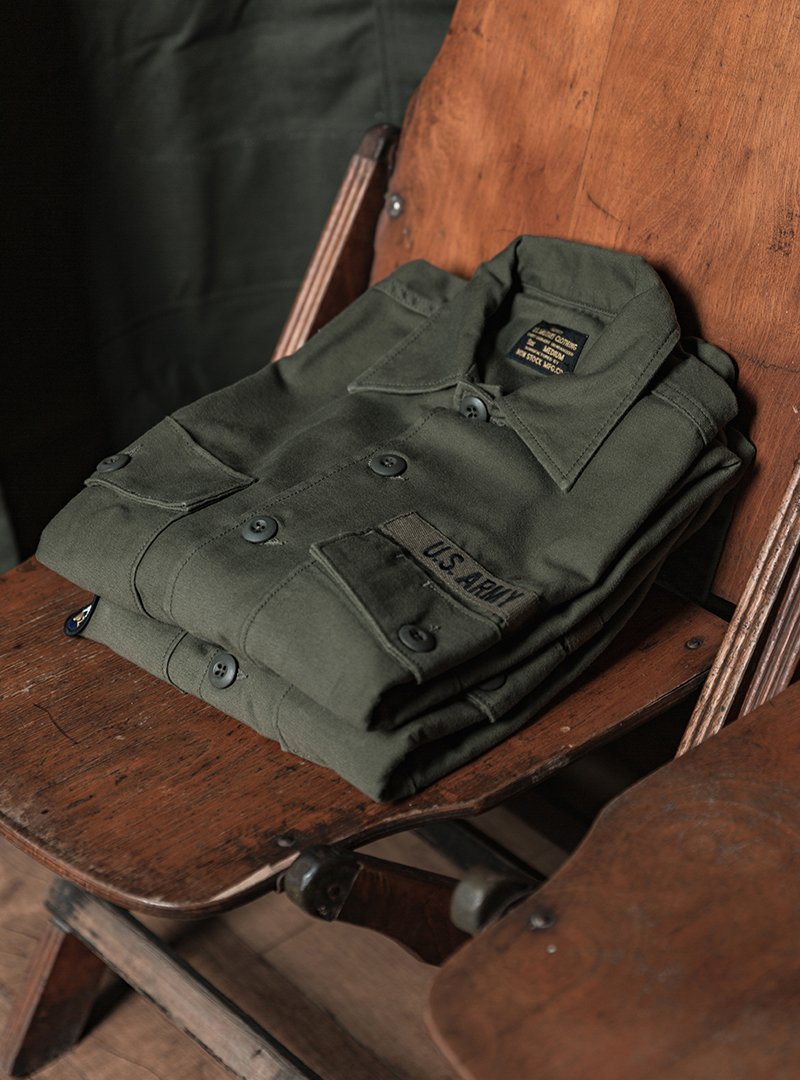 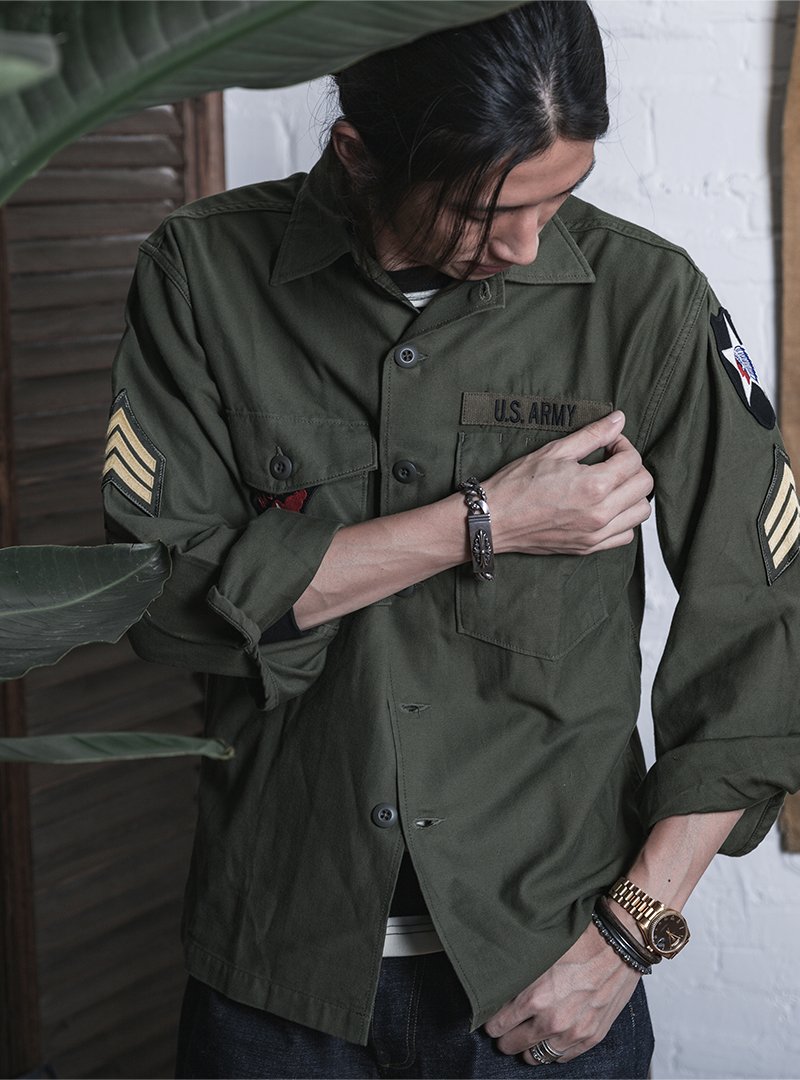